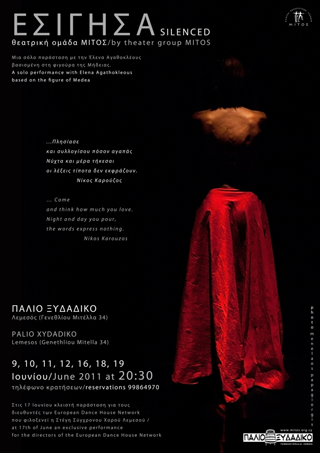 (Based on the character of Medea)

…"Come closer
and think of how much you love
Night and day you sweal
words expressing nothing."
Karouzos

Medea’s character is presented beyond the myth. She shows up after the crime and the performance is about the price of this action. At a moment of compulsory apology the memories are confused. All that is left is silence. Heiner Muller faces Medea, not as the killer of her children, but instead connects her with betrayal and revolution.
Abstracts were used from Euripides Medea, Heiner Muller’s Medea as Material, David’s Psalms and a selection from Nicos Karouzos’ poetry.
Duting the performance not a single word is heard, though it is a theatrical act.

Facebook
0
← “IF” (2010)Stories…from the sweet country of Cyprus (2011) →
Manage Cookie Consent
To provide the best experiences, we use technologies like cookies to store and/or access device information. Consenting to these technologies will allow us to process data such as browsing behaviour or unique IDs on this site. Not consenting or withdrawing consent, may adversely affect certain features and functions.
Manage options Manage services Manage vendors Read more about these purposes
View preferences
{title} {title} {title}
X