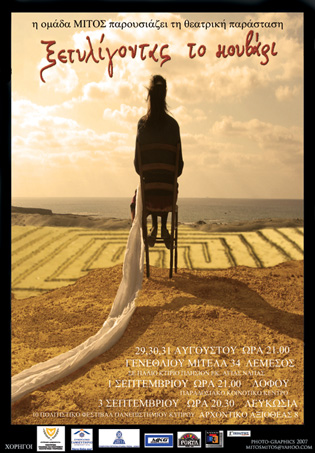 "So, it looked like it was
Inside thick darkness
There sat Minoan
And the myth that he killed
With great strength
Music made him sad
And his eyes were sore."
Christos Melides

Prompted by the Cypriot version of the myth of Ariadne, began a journey of exploring relations and archetypes – Theseus, Ariadne, Labyrinth, Minotaur.
The dramaturgy was based on songs from several traditions and poems of Cypriot writers: Elena Toumazi, Marios

Facebook
0
Askisi me metro (2008) →
Manage Cookie Consent
To provide the best experiences, we use technologies like cookies to store and/or access device information. Consenting to these technologies will allow us to process data such as browsing behaviour or unique IDs on this site. Not consenting or withdrawing consent, may adversely affect certain features and functions.
Manage options Manage services Manage vendors Read more about these purposes
View preferences
{title} {title} {title}
X