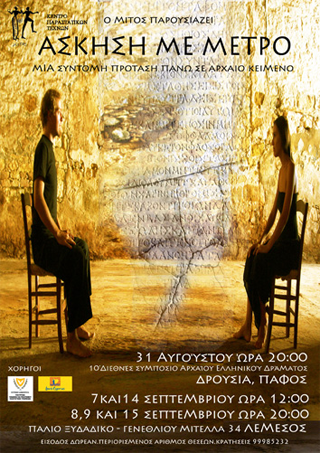 Based on Oedipus Rex of Sophocles

Askisi me metro (Exercise in Meter) was a presentation of Lukas Walewski’s and Elena Agathokleou’s practical research of ancient Greek drama texts. The emphasis is on the rhythm and melody of the text, practiced according to the rules of prosody.

The work was based on abstracts of chorus parts and episodes of the Sophoclean tragedy Oedipus Rex, in a combination of ancient and modern Greek language. Part of these abstracts were presented for the first time in the theatrical performance Ludus Oedipus of the group AlmaKalma in

Greece, where Lukas and Elena worked as the basic performers and as the chorus’ trainers.

Facebook
0
← Unrolling the Ball of Thread (2007)The animals that ate people (2008-2009) →
Manage Cookie Consent
To provide the best experiences, we use technologies like cookies to store and/or access device information. Consenting to these technologies will allow us to process data such as browsing behaviour or unique IDs on this site. Not consenting or withdrawing consent, may adversely affect certain features and functions.
Manage options Manage services Manage vendors Read more about these purposes
View preferences
{title} {title} {title}
X