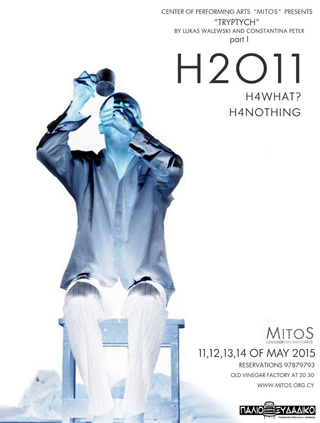 The production of the Center of Performing Arts MITOS, entitled "Triptych" and is the result of co-director and performer Lukasz Walewski with dramatist Peter Constantina.
The two collaborated again for the play 'The Ship of Fools, "This time, Walewski and Peter are turning their interest to internal human issues.

"The Triptych" is a series of solo performances by Lukasz Walewski arising through research on humans, the environment and the internal process of development of his personality. "Negotiates thematic resulting in an unrealistic comparison of conditions imposed on humans by subconscious personal thoughts."

The performances are one then the other: the "I2011" negotiates the relationship between man and the environment to "H4WHAT" man in a fight with his dreams while the third play of the trilogy, entitled "I4NOTHING" presents man in the final attempt to realize his dream or even to succeed

attend in his life between social constraints.

H2011
The performance H2011 already presented at the 3rd Festival of Performing Arts NO-BODY (Nicosia, November 2011), but this time we will see a revised version.

This is an artistic performance which negotiates sentimentality humans and tend to forget him. This is a comment on the issue of land-dried at the same time an image of a man looking for his sensitivity and the need for a "superior" soul state. Or maybe it's about our need to get somewhere higher up, as regards the personal and global development, looking the way they all come together. How we are connected with those that surround us, and whether we remember or unconscious, unconscious face of these relationships? Or you can speak to human cruelty and the fact that in modern society we go through hardness waves and not feel compassion, nor touches us something. Or it may be what brings us back to the

issue of drought earth and soil that can not give longer life. Can is a chance , a chance to heal the water as a source of life , of our own life.

Facebook
0
← Ship of fools (2014)H4WHAT (2015) →
Manage Cookie Consent
To provide the best experiences, we use technologies like cookies to store and/or access device information. Consenting to these technologies will allow us to process data such as browsing behaviour or unique IDs on this site. Not consenting or withdrawing consent, may adversely affect certain features and functions.
Manage options Manage services Manage vendors Read more about these purposes
View preferences
{title} {title} {title}
X