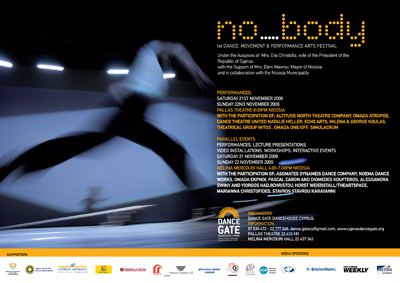 Created for the 1st Movement and Performing Arts Festival NO-BODY. Inspired by the book Diary of Adam and Eva by Mark Twain, who regenerates the exciting story of the first created humans in the form of diary notes.
Each step is a revelation, each glance an observation… the natural gift of passion intervenes with heaven’s absolute ignorance and innocence, defines fate, determines consciousness and the need for freedom that only knowledge can offer.
The absence of time in the Garden of Eden was a dream of pleasure, but pain, sadness, fear, agony and even death are life itself.

Facebook
0
← project BACCHAE (2009-2012)“IF” (2010) →
Manage Cookie Consent
To provide the best experiences, we use technologies like cookies to store and/or access device information. Consenting to these technologies will allow us to process data such as browsing behaviour or unique IDs on this site. Not consenting or withdrawing consent, may adversely affect certain features and functions.
Manage options Manage services Manage vendors Read more about these purposes
View preferences
{title} {title} {title}
X