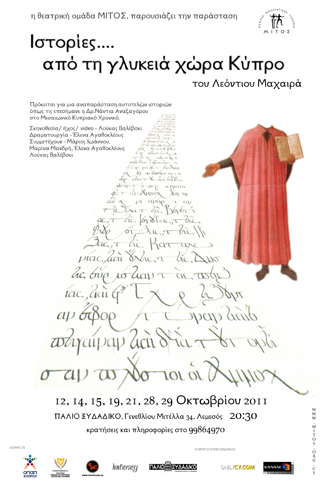 The perfrormance takes place in Leontios Machera’s room, who with the help of his two maids tell his guests stories and gossips of the courtyard.
Based on the self-contained stories of the Leontion Macheras Chronicles, as pointed out by Dr. Nadia Anaxagorou, were included "the murder of King Peter the First", "Queen Eleanor’s jealousy", "the breaking up of Templiotes", "the little pilgrim Georgios", among other stories. These narrations

are seemingly diverse in context but their synthesis brings out an overall impression on Macheras writing style and the approach in which he handled hot topics of his era. The language used in the performance is mainly the medieval language of the writer and in smaller part the modern Cypriot dialect.

Facebook
0
← SILENCED (2010)Η2Ο11 (2011) →
Manage Cookie Consent
To provide the best experiences, we use technologies like cookies to store and/or access device information. Consenting to these technologies will allow us to process data such as browsing behaviour or unique IDs on this site. Not consenting or withdrawing consent, may adversely affect certain features and functions.
Manage options Manage services Manage vendors Read more about these purposes
View preferences
{title} {title} {title}
X